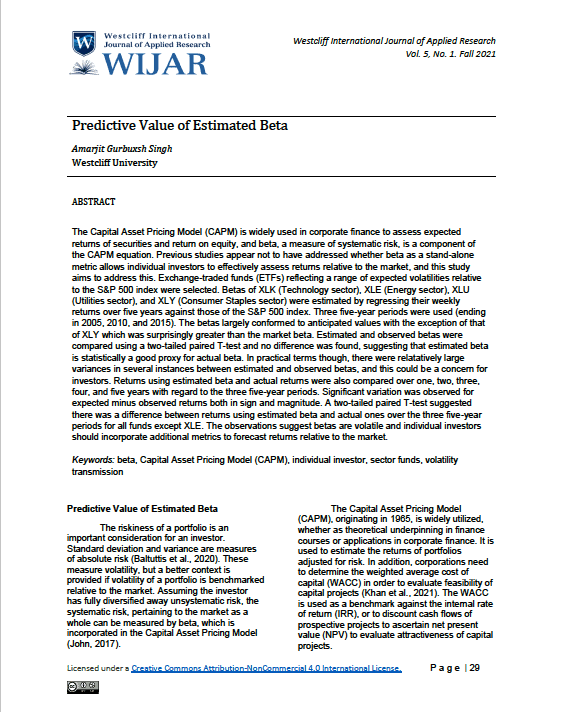 The Capital Asset Pricing Model (CAPM) is widely used in corporate finance to assess expected returns of securities and return on equity, and beta, a measure of systematic risk, is a component of the CAPM equation. Previous studies appear not to have addressed whether beta as a stand-alone metric allows individual investors to effectively assess returns relative to the market, and this study aims to address this. Exchange-traded funds (ETFs) reflecting a range of expected volatilities relative to the S&P 500 index were selected. Betas of XLK (Technology sector), XLE (Energy sector), XLU (Utilities sector), and XLY (Consumer Staples sector) were estimated by regressing their weekly returns over five years against those of the S&P 500 index. Three five-year periods were used (ending in 2005, 2010, and 2015). The betas largely conformed to anticipated values with the exception of that of XLY which was surprisingly greater than the market beta. Estimated and observed betas were compared using a two-tailed paired T-test and no difference was found, suggesting that estimated beta is statistically a good proxy for actual beta. In practical terms though, there were relatatively large variances in several instances between estimated and observed betas, and this could be a concern for investors. Returns using estimated beta and actual returns were also compared over one, two, three, four, and five years with regard to the three five-year periods. Significant variation was observed for expected minus observed returns both in sign and magnitude. A two-tailed paired T-test suggested there was a difference between returns using estimated beta and actual ones over the three five-year periods for all funds except XLE. The observations suggest betas are volatile and individual investors should incorporate additional metrics to forecast returns relative to the market.